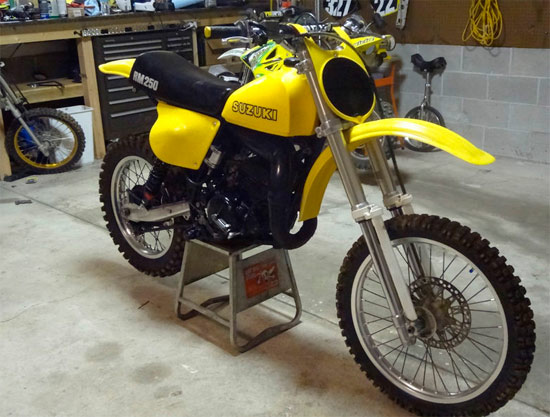 Bought this bike non running 3 years ago as one of my pet projects and finally finished it this summer. I took it out to our local track (Gravity Park in WI) and thought I would do one shake down lap. After one lap I decided not to pull off the track to do another and then another lap gaining confidence with the bike jumping farther and on the last lap (5) jumped a double that I hit with my RMZ 450 and cleared it easily and was laughing in my helmet it was so fun. I let a buddy I race with ride it and I couldn’t get him off :). The bike carves turns much better than I thought it could and the motor has much more torque than I would have expected. I also took it out to Fantasy Moto @ Tigerton WI to ride on a sand track to have some fun.

Now… Let me tell you how the project turned 2 years ago. I picked up a mint 89 RM 250 that I couldn’t pass up and these two bikes were sitting next to each other in my shop. I was walking by one day and wondered if the 89 RM front suspension would work on the 78. I let is simmer for a few months and then took both front ends apart and mocked it up and decided it was doable. Took the 89 Stem and had it machined by a buddy to accept the 78 Bearings and mounted it up. I ordered up new 17.5″ Progressive Shocks to level the bike (now the kickstand didn’t work any more so I took it off). It all works very well and now the bike has a front disk brake. The bike came without a silencer so I picked up a brand new one from a 03 KX 250 that I modified to fit. All the rest of the parts are Suzuki except for the new Plastic, Graphics, Pro-Taper CR-HI bars and new clutch lever, new chain (The sprockets are fine I just like gold chains). I have never had the engine apart, but when I bought it it 3 years ago It had great compression and great spark so I took it home. I had to drain old fuel out of the engine cause when I went to put gas in it and try to start it the carb flooded the engine. I dried it out and put a new needle and seat in the carb and it started right up and has ran great since. I owned it for a year when I noticed someone repaired the mag cover and the clutch cover on the other side although both sides have never leaked our caused and problems. The pipe has been welded on but has caused no problems. It has a newer Dunlop MX51(The rear wheel has a broken spoke… been that way since I bought it) on the rear and Bridgestone on the front. Probably the only thing I would change on the bike is the footpegs, larger aftermarket ones are available, The kickstarter is a little sloppy and a new seat cover is $45 and would complete the bike!

Although this bike looks awesome it is not intended to be a show bike or supposed to be a restoration but people love it @ the track and have given me offers on it but I decided to give it a shot here on e-bay with no reserve as I have had great luck selling other projects!

I probably would ship @ buyers expense but would rather someone come and pick it up after the auction, also your welcome to come by and check it out!

Please do not bid if you are not able to pay for the bike… The last bike I sold a little over a year ago the high bidder never responded after the auction… ridiculous!

Deposit of $200 due immediately @ end of auction and balance paid within 7 days of auction end…. Good Luck!