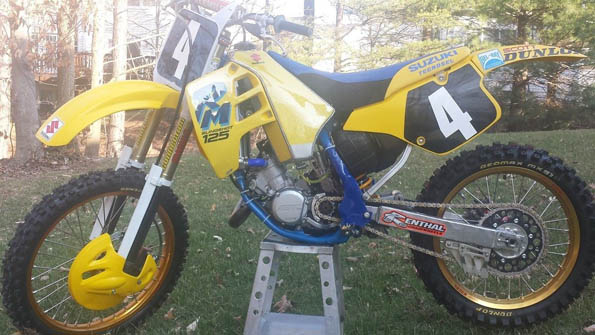 The bike runs simply amazing. I cannot believe how much power this bike has (you will not be disappointed). I built this bike to be raced and that is why I used the newer suspension parts (I wanted the best). I also kept the bike true to the 1990 era by using the 1990 fork guards/front brake cover and the bars Cooper used. These small touches bring the bike back to 1990. However, if you want to keep it real, the bike does come with the stock fuel tank which is in excellent condition. This was a low hour one owner bike (I have the title and it comes with the bike). The previous owner had bought the bike new and rode it until it lost compression (which is how I got it). He had replaced the levers, bars and rear brake pads and that its (bike still has the kickstand & original knobs in good condition). I shorten the suspension 1″, because I felt that this bike along with the 1990 KX125 were just way too tall back in the day, which affected the cornering, but the Suzuki’s always cornered well, so when I had Factory Connect build the suspension I had it shortened, however this takes nothing away from the quality as the bike will not bottom any more than it would with the additional 1″ of travel, it will only improve your cornering ability. This bike would put a smile on Guy Cooper’s face for sure!
SEE MORE